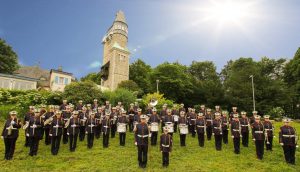 They play at city festivals, marksmen’s and folk festivals, flower parades, and other festive processions. Highlights in the history of this music society are: the numerous performances at the International Music Parade in Iserlohn, the tour of the Federal Music Parade in e.g. Münster, Trier and the Lancess Arena in Cologne, as well as the big Germany Tattoo in the Veltins Arena at Schalke in front of almost 20,000 spectators.

At the German Championships in June 2019, the Iserlohn Town Musicians with their “Queen show” won a gold medal and first place in the show classification. They are thus officially German Champions 2019.

In October 2022, the Iserlohn Town Musicians will celebrate their 25th anniversary as an independent association with a major music spectacle in Iserloh.