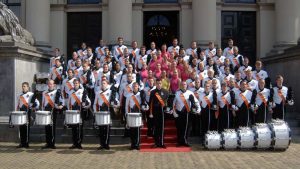 The Dordt top corps Jubal was founded in 1911 and started as a club with whistles and a few drums, to support a party night of boys’ association Timotheüs, a subdivision of the Dordt CJMV.

Since that year, thousands of people have been members of this whirling and constantly renewing music association, which has meanwhile performed all over the world. From Vlissingen to Nice in France, from Frankfurt to Hamar in Norway and from Dubbeldam to Chicago. Many successes, countless prizes, rave reviews: more than 100 years of Jubal has done the club no harm. But what is perhaps even more important are the friendships, the fun, the experiences, the way of life, things that the Juballers have all inherited.

In 2021, the present Drum & Bugle Corps will have been more than a music association for one hundred and ten years. It is a club that binds and fascinates, moves and delights. Jubal is a corps that is known at home and abroad for its appealing show programmes. This has led not only to an overflowing trophy cabinet, but even more importantly, to the status of true audience favourite.