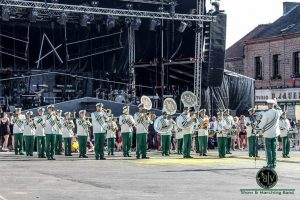 The group owes its name to a people of the Gallians who were settled on the banks of the Oise in ancient times and who also gave their name to the town of Beauvais.

The BLV is a Show and Marching Band that has a modern and varied repertoire, which gives them a fantastic interaction with their audience.

They perform throughout Europe alongside the much larger French formations (Musique des pompiers de Paris, Légion étrangère, Paris Brass Band), but also alongside European groups from England, the Netherlands, Belgium, Italy, Poland and Ukraine, and even alongside American groups during the New Year’s Day parade on the Champs Elysées.